Kahala Yoga is one of the important yogas which which shows success, name and fame. This yoga has two variants. Before, we go to the varients of this Yoga, lets understand the meaning of this Yoga.

There are varients in Kahala Yoga.  I am sharing all different opinion for this this Yoga.

According to the first varient : This yoga is formed when lord of fourth and ninth house lord posited in Kendra from each other. Plus Ascendant lord is strong, then this Yoga is formed.

As per second Varient : This Yoga is formed when Jupiter and lord of the fourth house are in mutual kendras. Again Ascendant lord should be strong.

The native who is born with this Yoga is energetic, outstanding, courageous and adventuruous. Native may be head of village or having large number of supporters or admirers.

There is one more varient of Kahala Yoga. Mantaweshar consider this Yoga differently.

As per him, dispositor of Ascendant lord should be in exaltation/own sign/mooltrikona sign identical with trine or an angle.

This makes a man kind, noble and prosperous. 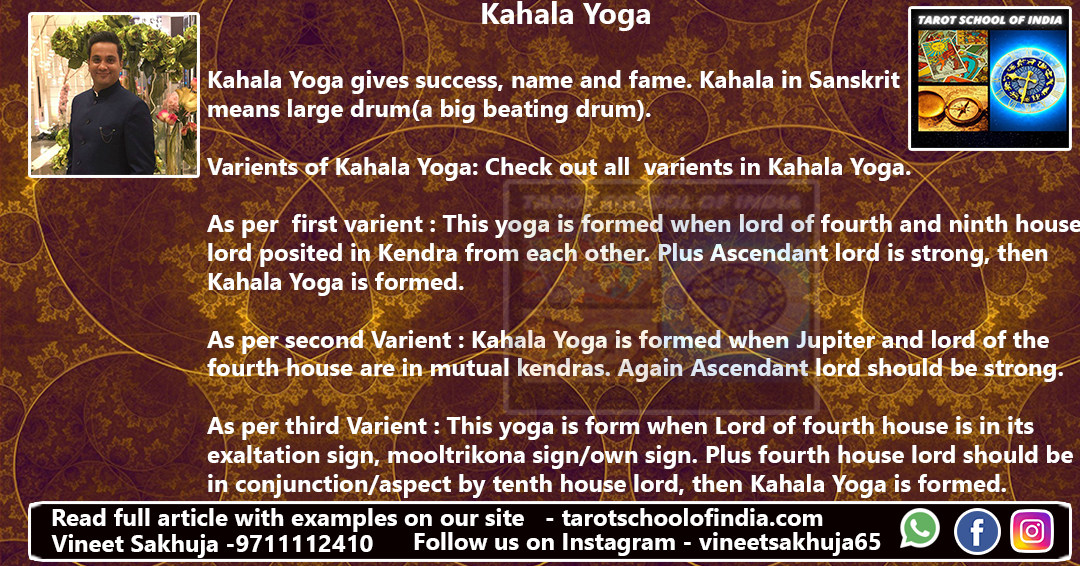 Example of Kahala Yoga in Chart.

Let’s look at the horoscope of Rahul Dravid who has kahala yoga in his birth chart.

As per first varient :

Fourth house lord is Jupiter and ninth house lord is Venus. Both are conjunct together in Birth Chart in the fourth house. Ascendant lord is Mercury which is in Virgo sign in Navamsha Chart. Hence Kahala Yoga is formed as per first variant.

One more varient of this Yoga : Ascendant Lord should be in in own sign. Here Ascendant lord is Mercury which is in Sagittarius sign, not in own/exaltation sign.

Almost all varients of Kahala Yoga is in the Birth Chart of Rahul Dravid. He is one of the best batsman that world has even seen. He made 36 test centuries in his career.

Fourth house lord is Mars which is in kendra from the Jupiter. Even Ascendant lord is strong. We have discuss that above.

So we can see Virender Sehwag got this Kahala Yoga in his birth chart. He is world most dangerous batsman in the world that have ever seen. He has scored two triple centuries in Test match also.

Rajesh Khanna is referred to as First Superstar of Indian Cinema. One of the best Actor that India has ever seen. Kahala Yoga is one of the yogas which brought so much success to Rajesh Khanna.