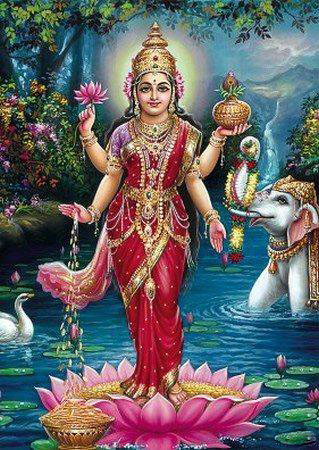 One of the wealth yogas is Lakshmi Yoga. This Lakshmi Yoga is consider very good from wealth and finances point of view. According to Rishi Parashara, the kendras or angles are known as Vishnu Sthan and Trikonas are considered as ‘Lakshmi Sthans” or house of Goddess Lakhsmi. Conjunction of kendra lord and trine(triokona) lord forms Raj Yoga. This is one of Raj Yogas.

How Lakshmi Yoga is formed in Astrology

But remember one point which is necessity to form Lakshmi Yoga is that ninth house lord has to be in either own/moolatrikona/exaltation sign in birth chart.

Lakshmi, the consort of Lord Vishnu, is the goddess of wealth. This Laxmi Yoga if present in a chart is consider good from prosperity point of view. This yoga is good for material possessions and enjoyments.

In Angelina Jolie Birth chart, this yoga is formed. She is an American Hollywood Actress and Humanitarian. Angelina Jolie has been declared Hollywood highest paid actress two times. Apart from this, Angelina Jolie is known for her humanitarian efforts and has won three Golden awards also. She is divorced from actors Jonne Lee Miller, Billy Bob Thortnton and Brad Pitt.

In horoscope of Bill Chart, Lakshmi Yoga is formed.

Bill gate has been one of the richest man in the world. His assets value is like $107.1 Million.

Both that is Angelina Jolie and Bill Gates, have other supportive yogas also which makes them rich and wealthy.