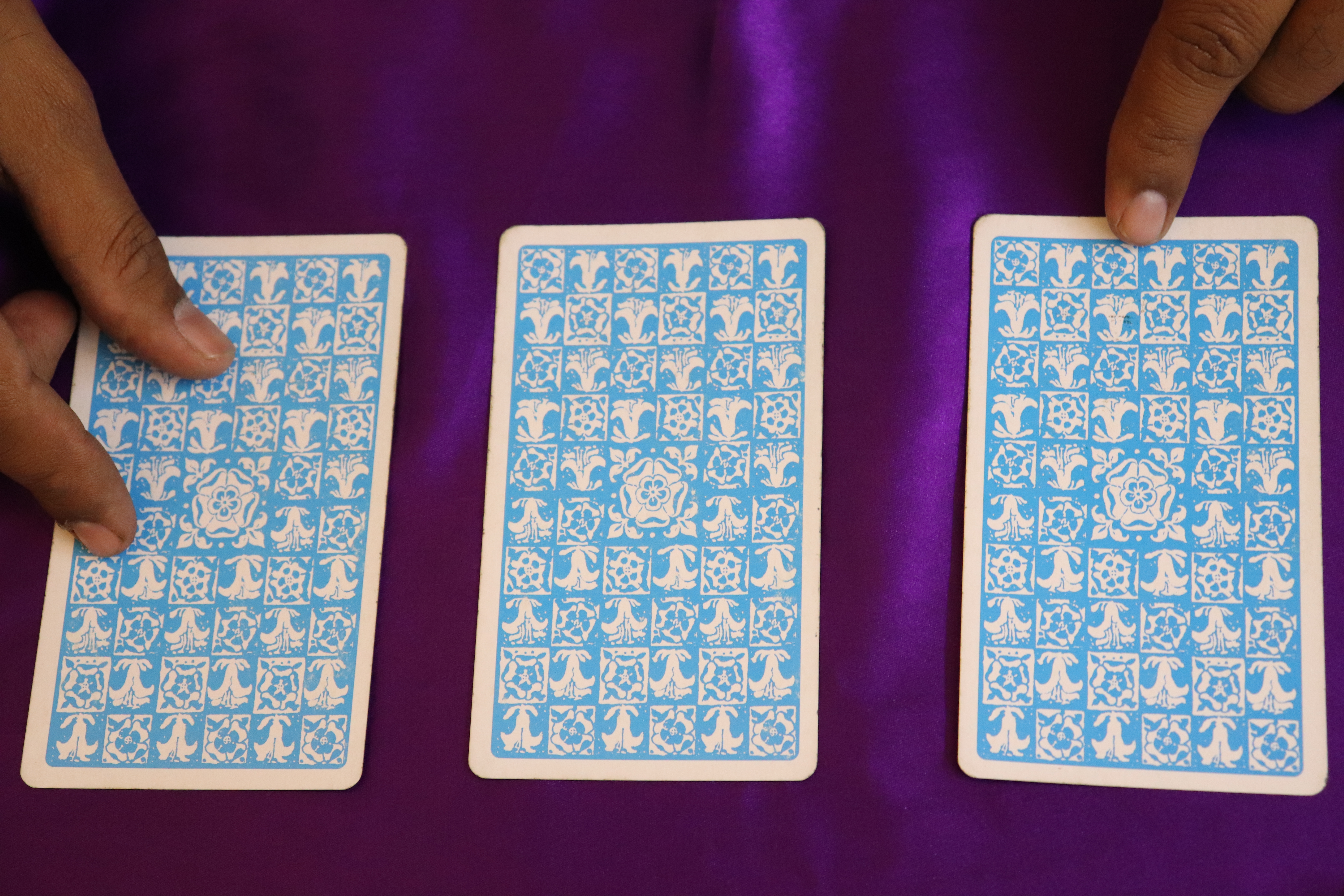 Three Card Tarot Spread is one of the most common tarot spread .With this Tarot Spread, Tarot Card Reader can look at things from different angles and examine situation better. There are some more variations in even Three Tarot Reading, but one of common and better among it is Past- Present – Future.

What is Three Card Tarot Spread?

In Three Card Tarot Spread, we pick one card each for Past, Present and Future. We can do this use this Tarot Card Spread for any particular topic/issues/query. One may use this spread for any subject like Career, Relationship, Finances etc. It’s a good spread especially when you need to look in situation more deeply for the question you want look in detail.

How this Tarot Card Spread works and purpose of it?

What happened in the past for that particular query/topic and how it affected you in the past and is it still having an effect on you?

Present card will depict the current stage of what’s going on. It shows where you are at this moment or what are the current circumstances. It also gives hint of the challenges and opportunities that you may be currently facing in.

What will be the outcome of current situation/query. How things are going on to move in future. 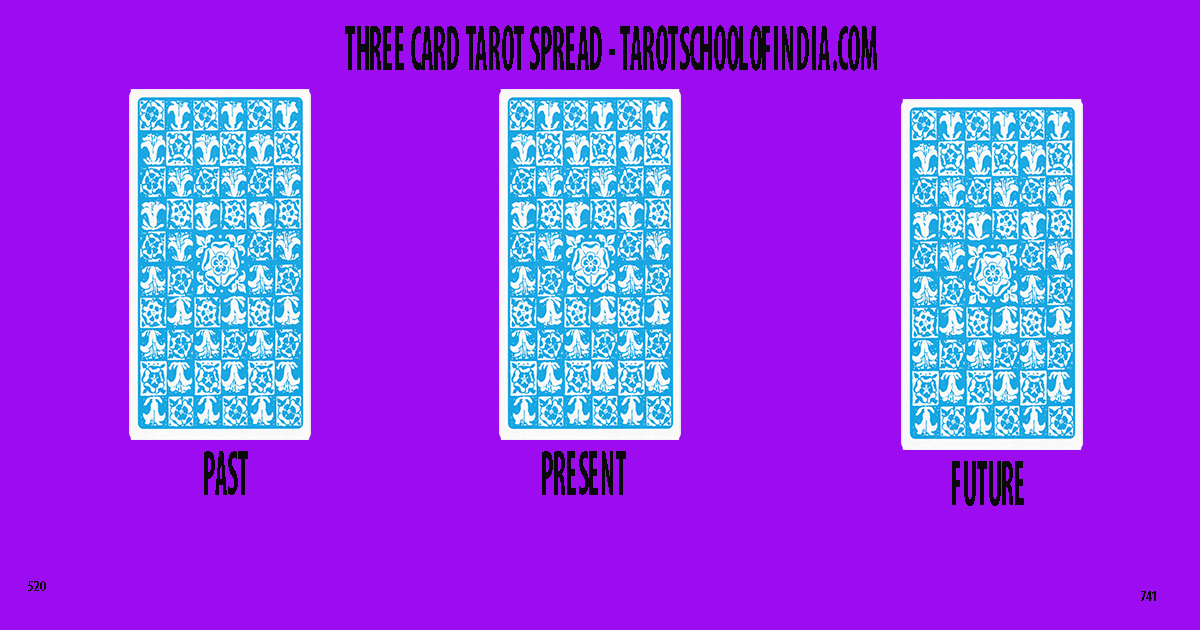 Layout for Three Card Tarot spread is simple, querent need to pick one card each for Past, Present and Future question that he/she wants to know about. This lady is from Bulgaria and took online Tarot Card reading from me and astrology reading also.

She asked for her current situation and upcoming future in her career. 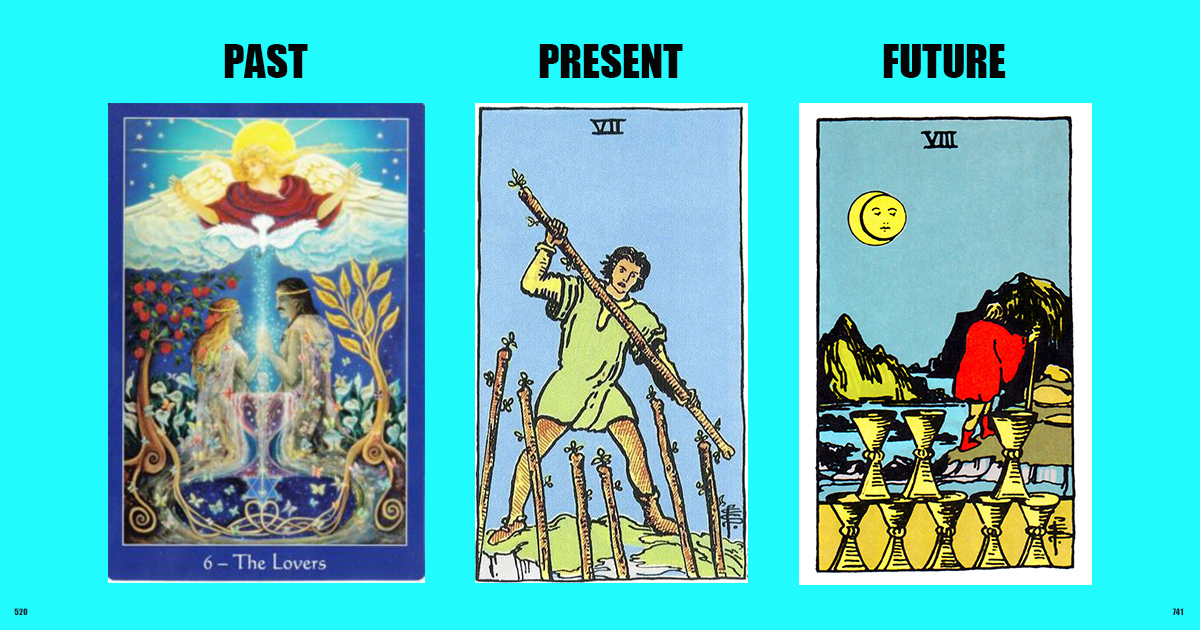 Now, i will share Tarot predictions by Three Card Tarot Spread on the basis of the cards that came in for her career reading. First i will give predictions by Tarot Cards and then later by Astrology.

Past in Three Card Tarot Spread – The Lovers Card

The card that came in Past position in Three Card Tarot Spread – is The Lovers Card. The Lovers Tarot card is about love, relationship and forming pair. But we have to see the question also, in which context this card has came. In Career Tarot Reading, The Lovers Tarot Card shows your passion and attachment towards your work. One feels very connected with work and loves it. This card in career reading can also show possibility of doing partnership. It also shows one may be doing dream job. One may be very enthusiastic about job. Since this card came in past position, it shows how much you love doing your work.

Present in Three Card Tarot Spread – 7 of Wands in Career

Seven of wands card came in Present position in Three Card Tarot Spread and this is a good card. In career reading, Seven of wands shows the characteristic and determination. This card shows the effort that lady is putting in. here, person loves the challenges and will give her best. It also shows person is ambitious. Person would try to remain on the top.

Above both cards in present and future also gives the hint of promotion. She got promoted also. This card sends the message – that Person has to carry the confidence that I can do it and I will do it.

8 of Cups card turn out In Future position in Three Card Tarot spread in her career reading. This is not a good card as we can see person walking away in the card. There is disappointment and uncertainty. Eight of cups in career reading, if it comes shows the possibility of change of career or even taking a break from career. Person may be turning back due to some emotional reasons. Above card clearly indicates something may happen due to which she may have to take a break from career or change her field. So I told her, that there may be change of priority after sometime. You may have your career your first priority but it may change after sometime.

Prediction of Career by Astrology

How to Predict career by astrology-  Consider 10 house and 10 lord for that. 10 house is the house of profession. With the help of Dasha, we will see ups and down in her career. Birth details are mentioned below. 10 house should be under benefic influence and 10 lord should be strong and well placed to see rise in the career. Dasha(Planetary Period) should be strong to support rise in career.

Beginning and Rise in Career

In astrology we can know when the native may have break/change in career and also child birth. In case of career(profession) 10 house and 10 lord should be considered first. Break/Change in career can come like in Dasha of 3 house/3 lord, 12 house/12 lord, 5 house/ 5 lord or planet placed in these houses. in Dasha of planet placed in 5 house/9 house or their respective lords one may expect child birth.

Thought change will come and she may take a break from her career in Rahu – Venus Dasha.

Venus(AD), is too powerful to give child birth. Venus in birth chart is the 5 lord  and in Saptamsha Chart, it is placed in the 5 house.

Yes, she gave a birth to a boy in May 2014. She left job earlier in 2014, and join back the job for some days or one month (max) but could not continue to do the job as her son got some major health issues.

Why her child faced major health issues. We will discuss it from her birth chart only:

(What happen – Her son one day all of sudden he got choked up while taking his food and his condition became critical and at one stage, he went to coma but he recovered. But his condition till current date is not good. He neither can’t understand and can’t walk. He got ill after couple of months, when he was born.

Saturn (R) is placed in the 6 house of birth chart and it aspects the 8 house.

Venus is the 5 lord in birth chart. It means you may expect some event related to 5 house. In antar dasha of Venus, she became mother. (she became mother in the dasha of Rahu- Venus- Venus)

Promise of Child Birth and issues by Astrology:

For promise of child birth we will see the concerned house that is 5 house and 5 lord and will see the afflictions in her birth chart.

You can read my other Tarot articles like how to read tarot cards , 5 card tarot spread, Celtic cross tarot spread, Personality Tarot Spread with detailed examples in my blog section. With the help of Tarot, Tarot reader can answer questions related to love and marriage(will i and my lover marry to each other, my relationship with my wife/husband in future), education queries like (will my son/daughter get admission in desired college), career prediction (like will I get job in this company etc), medical related query (when I will get recovered from health issues). I have shared all cases with help of Tarot and Astrology.  Articles on Top 10 Tarot cards which may symbolizes success, happiness and prosperity in career, finance, love(relationship) are also there on my website. For all my articles can check my blog – https://tarotschoolofindia.com/blog/

PREDICTIONS FOR ALL ZODIAC SIGNS 2019