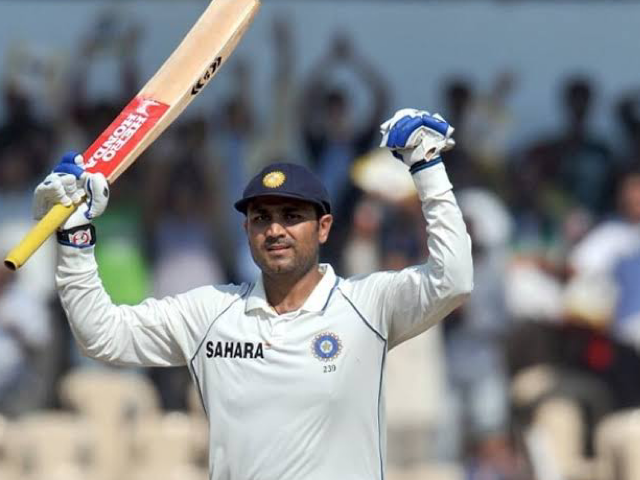 Virender Sehwag is one of the world most destructive and successful Test batsman. I have shared my astrological analysis of Horoscope of Virender Sehwag. He has score two triple centuries in Test Matches for India which is highest by India. 319 is the highest run scored by Indian batsman in Test matches in single innings. He has player over 23 Test Centuries and has played 104 Test Matches at the amazing strike rate of 82.86. In ODI also, he has made 15 ODI centuries with amazing strike of 104.3 and has scored double century also. He is also Right Arm Off Spin bowler and has taken 96 wickets in ODI.

One of the World Best Batsman Virender Sehwag is born on 20 Oct 1978 in Delhi. His Sun sign is Libra and Moon sign is Taurus as per his horoscope.

He is born in the Jat family of grain merchant and spent his childhood in a joint family with siblings, uncles, aunts and sixteen cousins. Now he is settle down in New Delhi, the Sehwag family hails from Haryana. His father attributes his interest in cricket to a toy bat which he was given when he was just seven months old. He attended school in Delhi.

Veeru was the third of four children born to father Krishan and mother Krishna Sehwag, with two elder sisters Manju and Anju and younger brother Vinod. He attended Arora Vidya School in Delhi, and pestered his parents to let him play cricket, on the basis that he was not academically gifted.

Early in his career, he had a reputation for being an attacking batsman and his coach was Amar Nath Sharma. Later he attended Jamia Milia Islamia for graduation.

Promise of Siblings in the Horoscope of Virender Sehwag

Virender Sehwag had two elder sisters and one younger brother. Let’s look at the promise of elder and younger sibling from the horoscope of Virender Sehwag.

In Navamsha Chart of Virender Sehwag

To see younger sibling in a chart, astrologer should focus on third house, its lord, Mars and Dreshkana D-3 Chart.

What makes Virender Sehwag as fearless batsman from his Horoscope:

Yogas in the Horoscope of Virender Sehwag

Astrologer should also consider the Asthakvarga Chart in a horoscope as it gives idea of which house is strong and weak.

Jaimini Raj Yogas in the Horoscope of Virender Sehwag

Lets look at the Raj Yogas formed by Jaimini Astrology in the horoscope of Virender Sehwag.

Astrological Parameters of Rise in Career

Virender Sehwag made his debue against Pakistan in April 1999 in ODI match. But he didn’t perform well and later he got dropped from the team.

Dasha at that time when he made debue

This Mercury is in Deena Awastha and expect demotion in his position. Mercury is in in Nrityalipsavastha under Shayanadi Awastha, the native will be endowed with honour and he got honoured as he got the opportunity to play for the Indian Cricket Team. This Mercury has more Ishta Phala 36.14, that could be one of the reasons that he got the chance to play for Indian Cricket Team.

Mercury is in Kshobhit Awastha. The result of those houses in which the Kshobhit planets are placed are destroyed. Overall This Mercury is not fully fruitful.

(PD Lord Ketu is in Bhojanaawastha, the native will face great adversities on account of his deeds. Sehwag got out for one run only against Pakistan in debue match. He got out lbw to Shoiab Aktar by playing wrong shot.)

Transit in the Horoscope of Virender Sehwag

Even Transit wasn’t favourable in the Horoscope of Virender Sehwag when he made debue.

Astrological Analysis of Dasha in the Horoscope of Virender Sehwag

From June 2002 to june 2005, he was going through the Antar Dasha of Venus under the Maha Dasha of Rahu.

Marriage and Arjuna Award from the Horoscope of Virender Sehwag

Virender Sehwag won Arjuna Award in August’ 2002. He won award by Government and BCCI during Rahu – Venus Dasha. In April 2004, he got married under heavy security in a widely publicised wedding hosted by Late Arun Jaitley the Union minister of India at his residence. Ad lord Venus is the natural significator of  Marriage. In Birth Chart of Virender Sehwag, Venus recieves aspect of seventh house lord Saturn also.

Principle of Transit of Saturn.

Principle of Saturn transit – In a bhava with 5 to 8 bindus makes one leader of masses, gives wealth and dominance over others.

The transit of Saturn in a kakshaya having bindu in his Astkavarga gives inheritance, victory etc.

Transit in the Horoscope of Virender Sehwag

Transit when Virender Sehwag made 309 runs against Pakistan

In the Horoscope of Virender Sehwag, transit was favourable when he made 309 runs against Pakistan in March’04.

Rise in Career by Varshphal Chart in Horoscope of Virender Sehwag with Jaimini Astrology and Third, Fourth Level Dasha

Virender Sehwag did very well from Oct 2003 to oct 2004. We can see this thing by Varsphal chart also. To read more, click –

(Jupiter is exalted in Birth Chart as well as Dashamsha Chart. In Navamsha Chart it aspects tenth house. This Jupiter is in Deeptavastha.)

Virender Sehwag made 254 runs against Pakistan in Pakistan in January 2006. He did well while playing away from country during this time. Next series he didn’t perform well against England in India. But overall, this dasha brought name and fame.

Dasha of Ascendant lord is consider good for name and fame. Plus, its Vargottama also.

When Sehwag made triple century, Transit Saturn was more favorable as it was transiting in house where there were more bindus.

Sehwag missed out one ODI in Feb’2006 due to shoulder injury. Sun and third lord are under affliction of Saturn. But due to good bindus in Ascendant of Birth Chart and Ascendant lord Vargottama, he didn’t had any major injury for long time.

Sun is again in Second house from Rahu in Birth Chart.

In Dashamsha Chart, Sun is in eleventh house – house of gains. This Sun is in sixth house from Rahu. He did better in Rahu- Venus Dasha as compare to Rahu – Sun Dasha.

This Sun has more of Kashta Phala that is 48.12. Plus this Sun is in Khala Awastha also(deepadi awastha which is not good. Sun lacks the strength as its opposite to Digbali. Sehwag captained India for just few matches only. Sun is also the significator of authorithy. Even Mars is exactly opposite to house of Digbali. Venus AD was more fruitful as compare to Sun AD. He gave good performance but had fall also during this AD when less supportive PD came. One of the saving Grace is that this Sun is in Mudit Awastha.

Virender Sehwag did well in the Moon AD under Rahu.

Sehwag got dropped from the ODI in Jan 2007 and then got drop even from Test Matches. He was Vice Captain in Test matches that time.

(PD Lord Saturn is sixth house lord in Birth Chart in enemy sign. This Saturn is in Deenaawastha.

Sehwag was drop in 2007 but came back again in team towards the end of year 2007. Gambhir was suffering from injury and Sehwag was not in the list of 24 probable for Australia tour. Then Gambhir got dropped with sore shoulder and Sehwag came in.

Virender Sehwag got the opportunity to play for India again. In the third test match against Australia in Australia. In the fourth Test Match, Sehwag made 151 runs in the second innings. He was back in form.

In March 2008, Virender Sehwag made 319 runs in single test innings against South Africa which is the highest score by Indian batsman. This is fastest triple century as he made off 278 runs ball.

In same year, he made 254 runs against Sri Lanka also.

See the Antar Dasha of Mars who is ninth house lord involve in Raj Yoga.

Virender Sehwag made one more triple century and its his highest score 319 runs against South Africa.  Let’s see the Transit of Jupiter and Saturn when he made 319 runs.

Transit of Saturn in connection with Natal Sun

Chidra Dasha in the Horoscope of Virender Sehwag

Sehwag performance wasn’t upto mark during end of Rahu – Mars Dasha that is Chidra Dasha. This Dasha need to be analysed very carefully.

This Mars had only 25.80 istha pahla.  Mars is also in Dukhi Awastha under Deeptadi Awashthas which shows struggle also. Any planet in Dukhi Awastha, then there is theft and fear from fire and king. Here king means authority. Sehwag might had fear that he may never come back in team. In lajjitawastha, its in Kshudit Awastha but also in good awastha like Khsobit Awastha also.

He did very well during dasha of Jupiter- Jupiter- Venus.

(This Jupiter in Gravit Awastha as well as Deepta Awastha.)

Sehwag got dropped in year 2013, then didn’t got the opportunity to play again for the team. Later on, he was playing domestic cricket and IPL also.

Result of Moon sign in the Horoscope of Virender Sehwag

In India, it’s not easy to get opportunity to play for country India.