Tarot and Astrology | Tarot School of India Skip to content

Astrologer can give answer to those also who don’t have birth details with them by using Prashna Kundli.

If you want to know, What is Prashna Kundli and uses of Prashna Kundali, read this link – https://tarotschoolofindia.com/prashna-kundli-astrology-find-lost-article/

Variations/Branches in Astrology and Tarot

In Astrology, there are different branches like by Vedic,KP,Naadi etc.In Vedic Astrology,more focus is on Divisional Chart. In Tarot also,there are some variations in Tarot Cards like Rider Waite Cards, Osho Zen Cards, Angel cards etc.

Here in Astrology, I have used Birth Chart and Navamsha Chart with dashas and in Tarot, i have used Personality Spread.

Personality by Tarot and Astrology 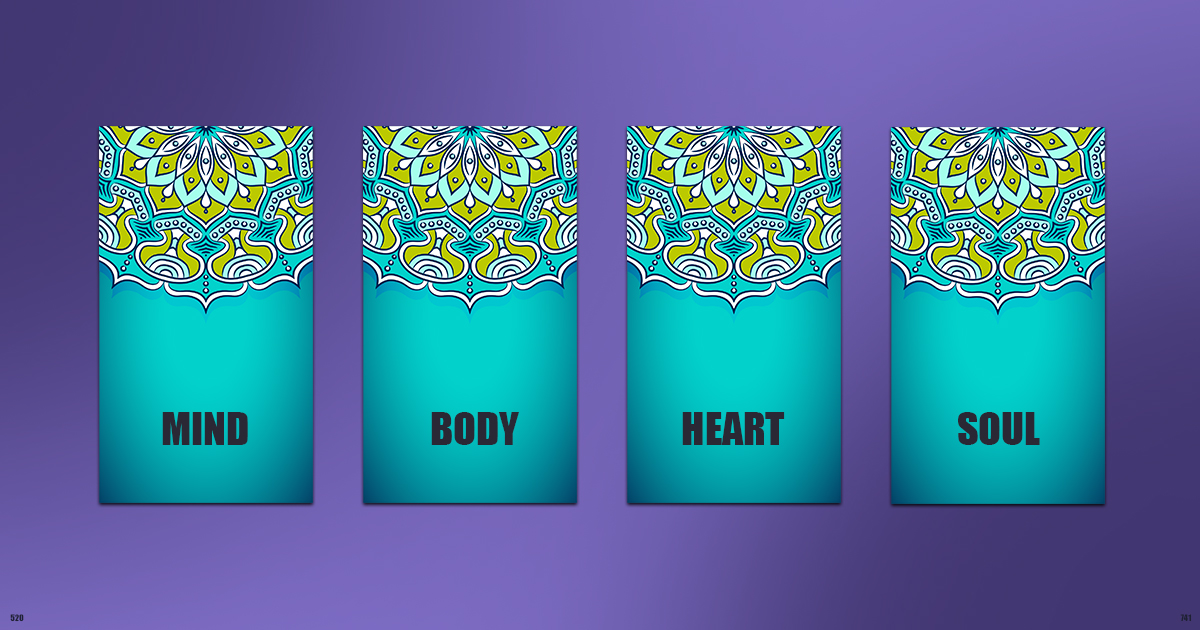 Case Study by Tarot and Astrology:

Below – I am sharing, how Tarot and Astrology are related to each other with an example. 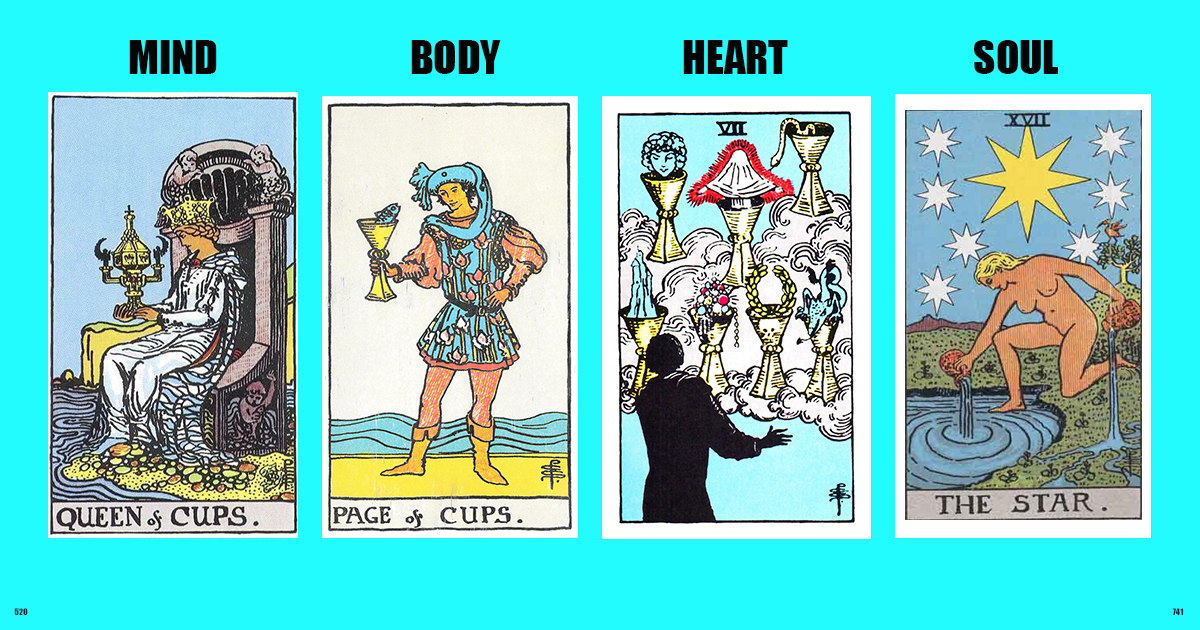 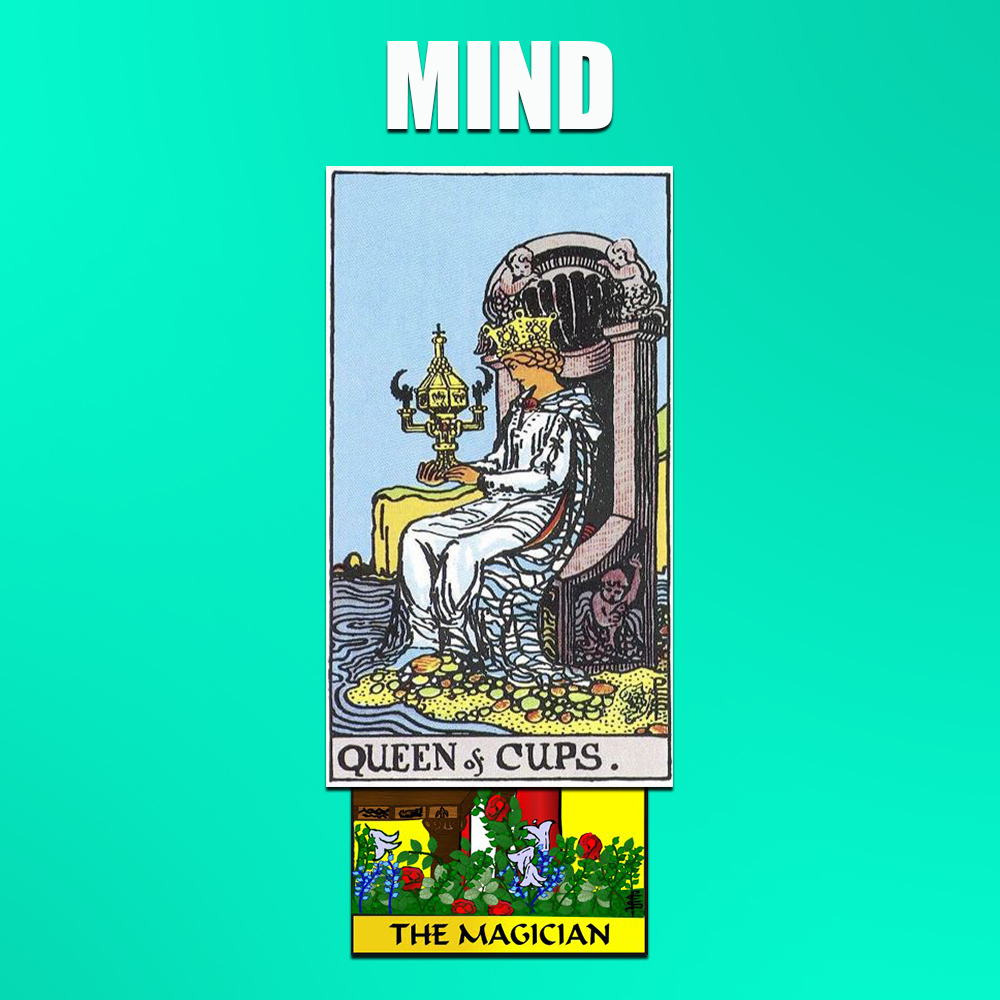 Tarot cards that came here in position of Mind 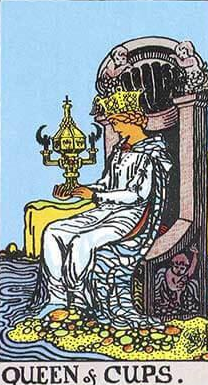 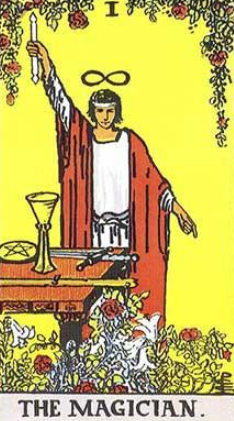 Combination of Queen of Cups and The Magician Card in Tarot Cards:

Combine Result of Tarot and Astrology:

Below, i will discuss combine result by the Tarot Cards that came in with her astrology birth chart. The Magician card – Person is very intelligent and in Astrology, fifth lord is in fifth house – own house.  Read combine result now by Tarot and Astrology: 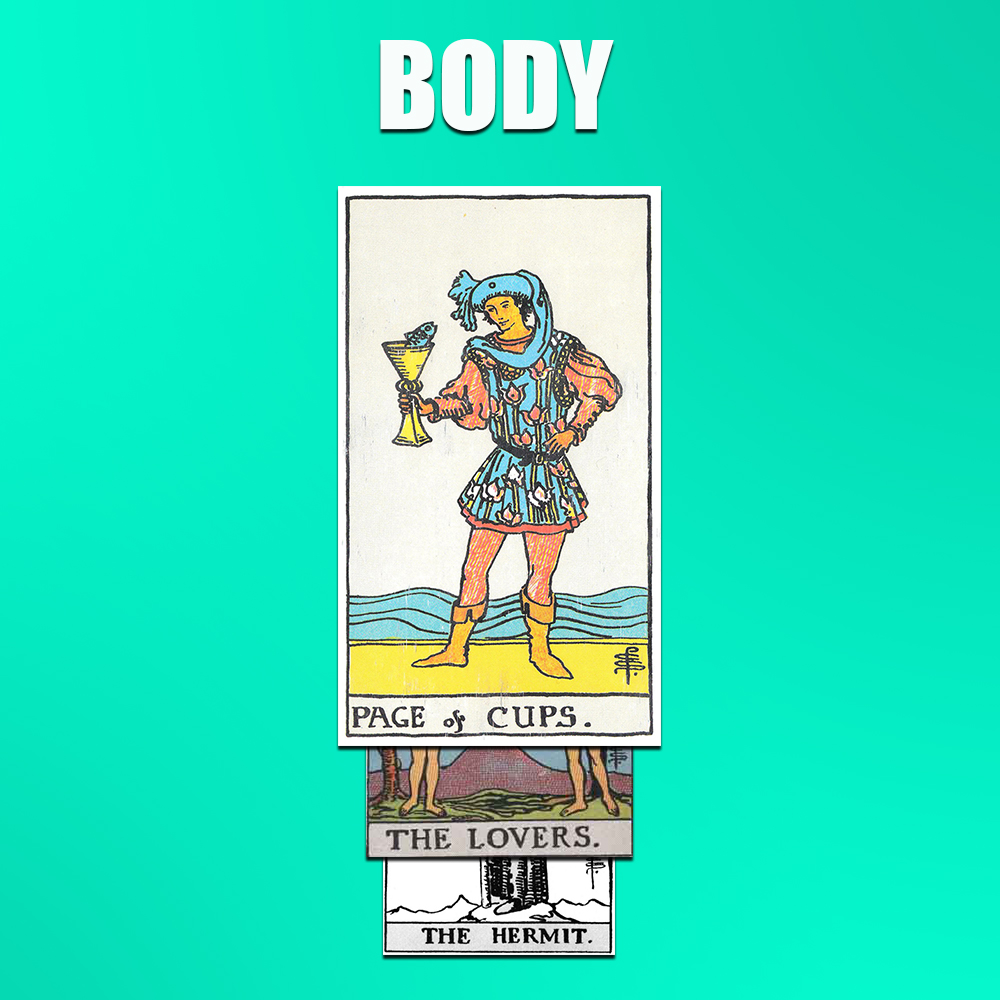 In Body – Page of cups Tarot card came up: 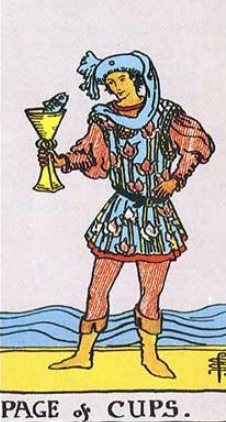 Card that came behind on its own, were The Lovers Tarot Card and The Hermit card. Take these cards as a message form. 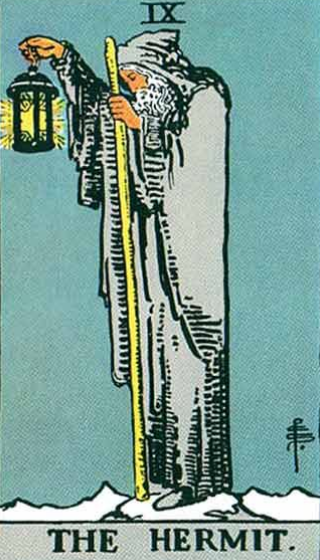 (Above both cards are very strange and opposite card. The Lovers card generally speaks for love, relationship, union and the hermit card is opposite, it shows isolation and aloofness. Above cards indicates she might have gone through sufferings and pain due to above thing and may not have paid the required attention that she might have been at one stage. )

Combine result of Tarot and Astrology in Body:

Below, i will discuss combine result of Tarot and Astrology in body or physical appearance that how person will look like body structure, health etc 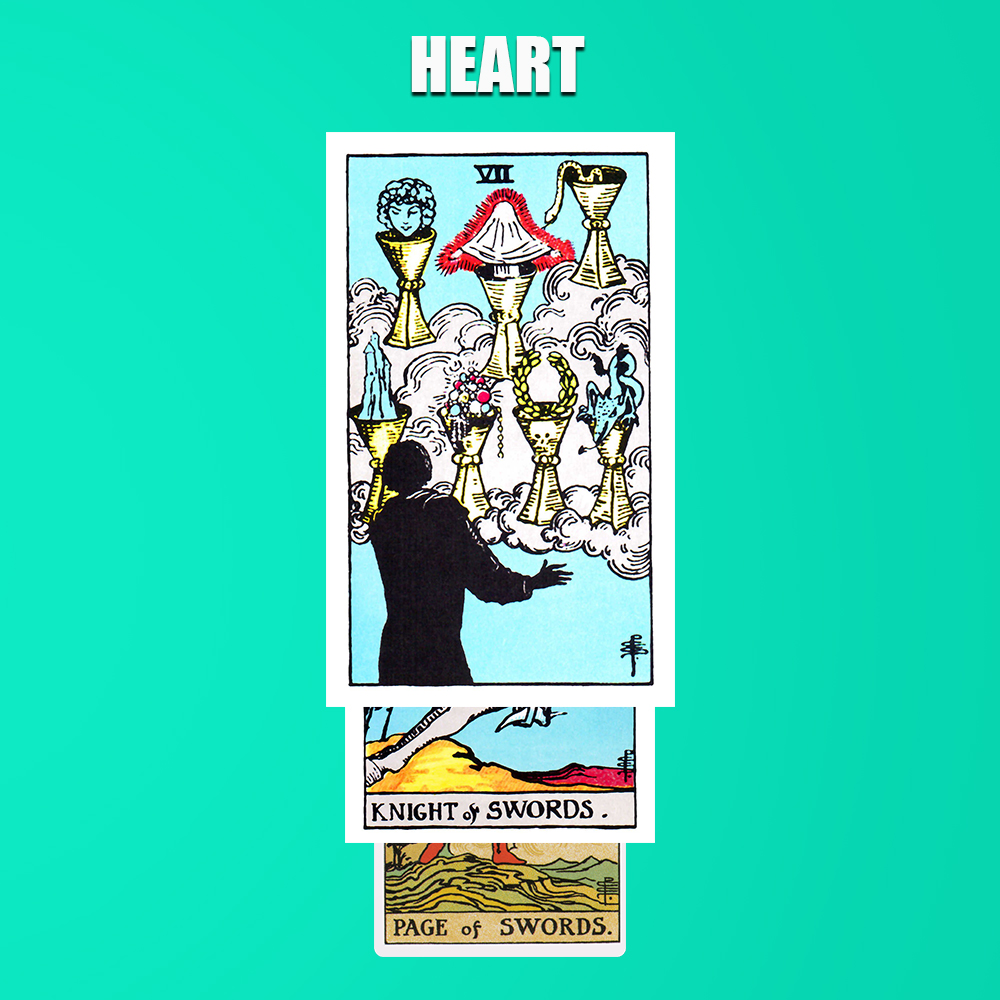 7 of cups card came, two more cards came around (Page of swords and knight of swords) 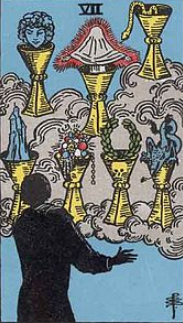 Here, we can see in this picture in above Tarot Card, person is having many things in his mind. Here there are many choices and it may bring illusion. Biggest challenge is to distinguish between what is worth and what is worthless and recognizing what we actually needs. It’s like asking for self-analyzing.

Tarot Card that came along with Seven of cups is Page of swords and Knight of Swords.

Page of swords and Knight of Swords gives some indication for why seven of cups came. 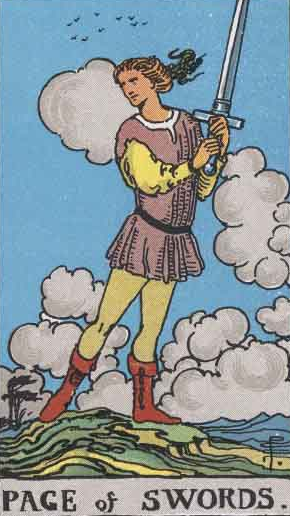 Above Tarot cards speaks that she may have to go through some abusive language/treatment. She has to come through some forced changes. Quick changes came in her life. She was not given a fair treatment. Now we are doing a personality spread which constitutes body, mind, heart and soul.

Now merge both the Tarot cards that came in and try to assess what all its indicating.

All above cards indicate, that she had a bad time and went through lot of sufferings in relationship. Page of swords shows when she was a kid, she had a very rough time also.

Combine Heart of Cups Plus The Star Tarot Card

It’s a beautiful Tarot card that has come up in the soul place. 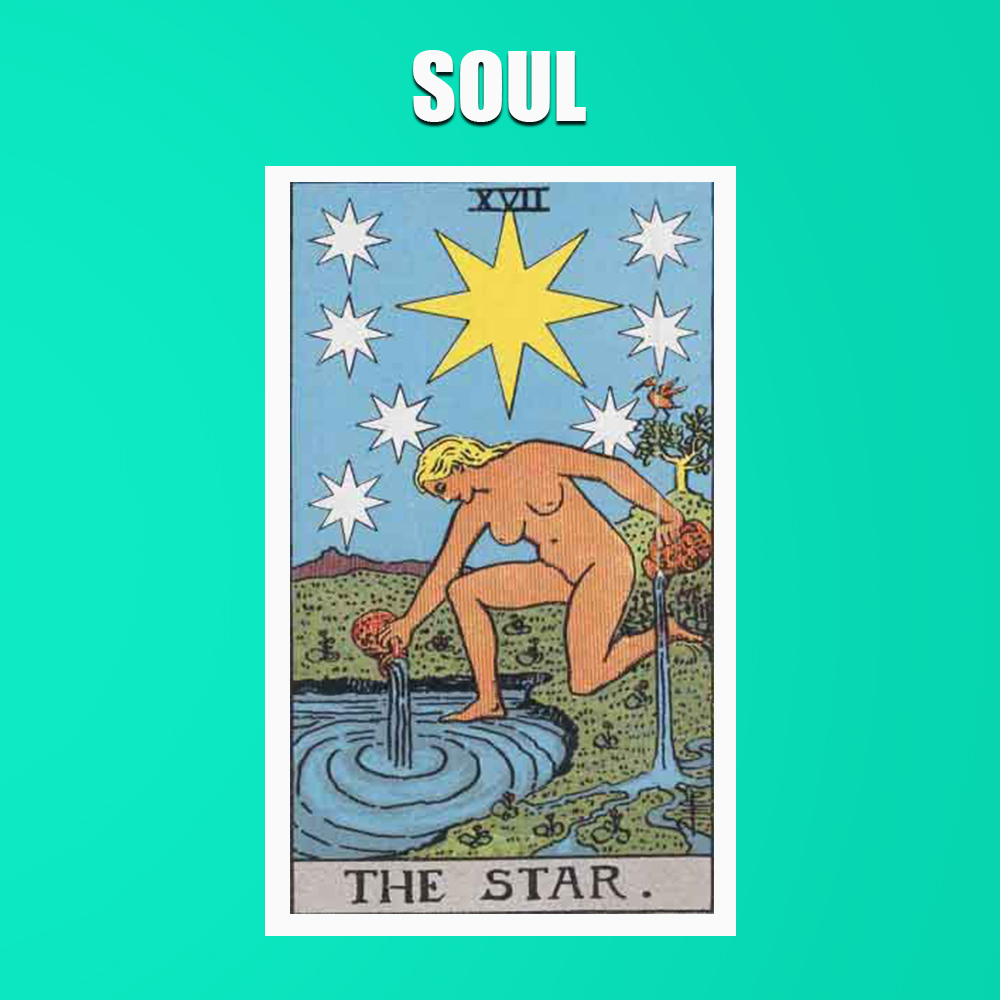 We can see in this Tarot card, All heavenly bodies that guide us across land and seas.

As the name suggests The Star, she is also like a Star. This is the card of optimism, hope and this card shows success. Here, we can see the happiness and the balance this person has. This is the card of expansion and freely giving. What you need is to believe in yourself, once you do it, you can achieve success. You have the charisma to do it.

Astrology Reason for Heart and Soul and her full personality.

(So far, we can see the beautiful relation of Trine lord with Ascendant/Ascendant lord)

Combine Result by Tarot and Astrology for her heart,soul and overall Personality

Her past life by Astrology and Tarot. See Arishta in Astrology:

We can know her past life by both Tarot and Astrology. Message card that come behind, gives clue in Tarot. In astrology, we can see the dasha and know what time period she might have face in her life. There is arishta in her birth chart.

She had multi relationship. Unfortunately all didn’t worked out unfortunately.

Exalted Jupiter aspects seventh house – the house of marriage. She gave her best in the relationship she was involved.

What happened to her mother due to Tarot and Astrological Reasons mentioned above:

(Above article clearly shows how beautifully Tarot and Astrology works. It’s advisable specially if you or your son/daughter is getting married, then you should go for Match Making by Tarot and Astrology and also this Personality spread by Tarot, so that you may take right decision in this life for this occasion.)

This article got published in Research Journal of Astrology – Future Samachar. I am sharing the image also below.

2 thoughts on “Tarot and Astrology”